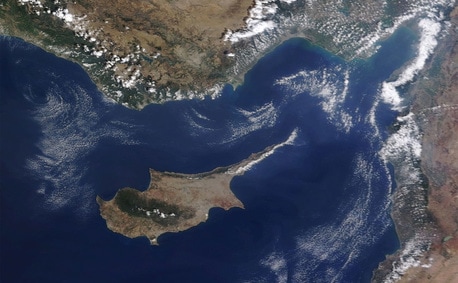 The earliest known human activity on the island dates to around the 10th millennium BC. Archaeological remains from this period include the well-preserved Neolithic village of Khirokitia, and Cyprus is home to some of the oldest water wells in the world.[9] Cyprus was settled by Mycenaean Greeks in two waves in the 2nd millennium BC. As a strategic location in the Middle East, it was subsequently occupied by several major powers, including the empires of the Assyrians, Egyptians and Persians, from whom the island was seized in 333 BC by Alexander the Great.
Subsequent rule by Ptolemaic Egypt, the Classical and Eastern Roman Empire, Arab caliphates for a short period, the French Lusignan dynasty and the Venetians, was followed by over three centuries of Ottoman rule between 1571 and 1878 (de jure until 1914).

Cyprus was placed under British administration based on Cyprus Convention in 1878 and formally annexed by Britain in 1914. While Turkish Cypriots made up 18% of the population, the partition of Cyprus and creation of a Turkish state in the north became a policy of Turkish Cypriot leaders and Turkey in the 1950s. Turkish leaders for a period advocated the annexation of Cyprus to Turkey as Cyprus was considered an "extension of Anatolia" by them; while since the 19th century the majority Greek Cypriot population and its Orthodox church had been pursuing union with Greece, which became a Greek national policy in the 1950s. Following nationalist violence in the 1950s, Cyprus was granted independence in 1960.  In 1963, the 11-year intercommunal violence between Greek Cypriots and Turkish Cypriots started, which displaced more than 25,000 Turkish Cypriots and brought the end of Turkish Cypriot representation in the republic. On 20 July 1974, Turkey invaded Cyprus, leading to the capture of the present-day territory of Northern and the displacement of over 250,000 Greek Cypriots and 50,000 Turkish Cypriots.

The Cyprus Republic has de jure sovereignty over the island of Cyprus, as well as its territorial sea and exclusive economic area, according to international law (except for the British Overseas Territory of Akrotiri and Dhekelia, administered as Sovereign Base Areas, 2.8% of the territory). However, the Republic of Cyprus is de facto partitioned into two main parts: the area under the effective control of the Republic, located in the south and west, and comprising about 59% of the island's area; and the north, administered by the self-declared Turkish Republic of Northern Cyprus, covering about 37% of the island's area. Another nearly 4% of the island's area is covered by the UN buffer zone. The international community considers the northern part of the island as territory of the Republic of Cyprus occupied by Turkish forces. The occupation is viewed as illegal under international law, amounting to illegal occupation of EU territory since Cyprus became a member of the European Union.[30]

Strategically situated at the crossroads of Europe, the Middle East, North Africa and Asia, Cyprus is becoming an even more important regional business center as well as an international communications and transport hub. With its modern infrastructure, sound legal system, tax incentives, low crime rate and well educated labor force, Cyprus is a favorable regional operations platform for European companies.
​
Since its accession to the EU, Cyprus has undergone significant structural reforms that have transformed its economic landscape. Trade and interest rates have been liberalized, while price controls and investment restrictions have been lifted.
​
Cyprus has developed into an international banking and business center with many International Banking Units and over 1.000 fully fledged overseas companies operating on the island. Since May 1st 2004, the date when Cyprus became a member of the European Union, all banks licensed by the competent authorities of European Union countries have been allowed to establish branches in Cyprus or to provide banking services on a cross border basis without requiring a license from the Central Bank of Cyprus. Cyprus is also an important shipping center and currently holds in its registry one of the leading merchant fleets in the world.